These have a complex and exquisite history, just like the dance itself. If we step into the origins of this dance, looking at the contexts in which dance was performed, I see two distinct contexts.

The first being the dance as ritual function, the second, dance as social occasion apart from religious or ritualistic context. 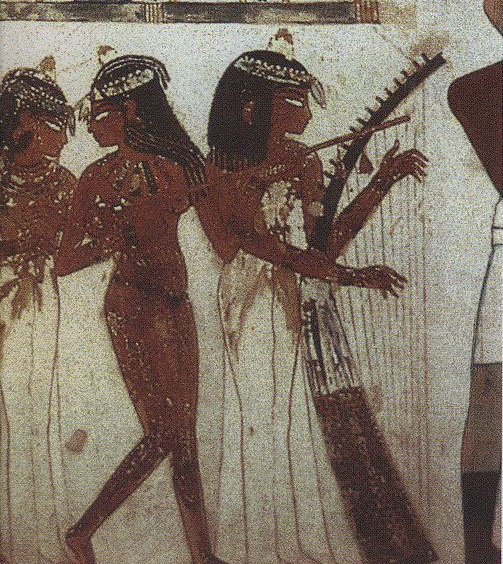 Scene of musicians and dancers from an Egyptian tomb 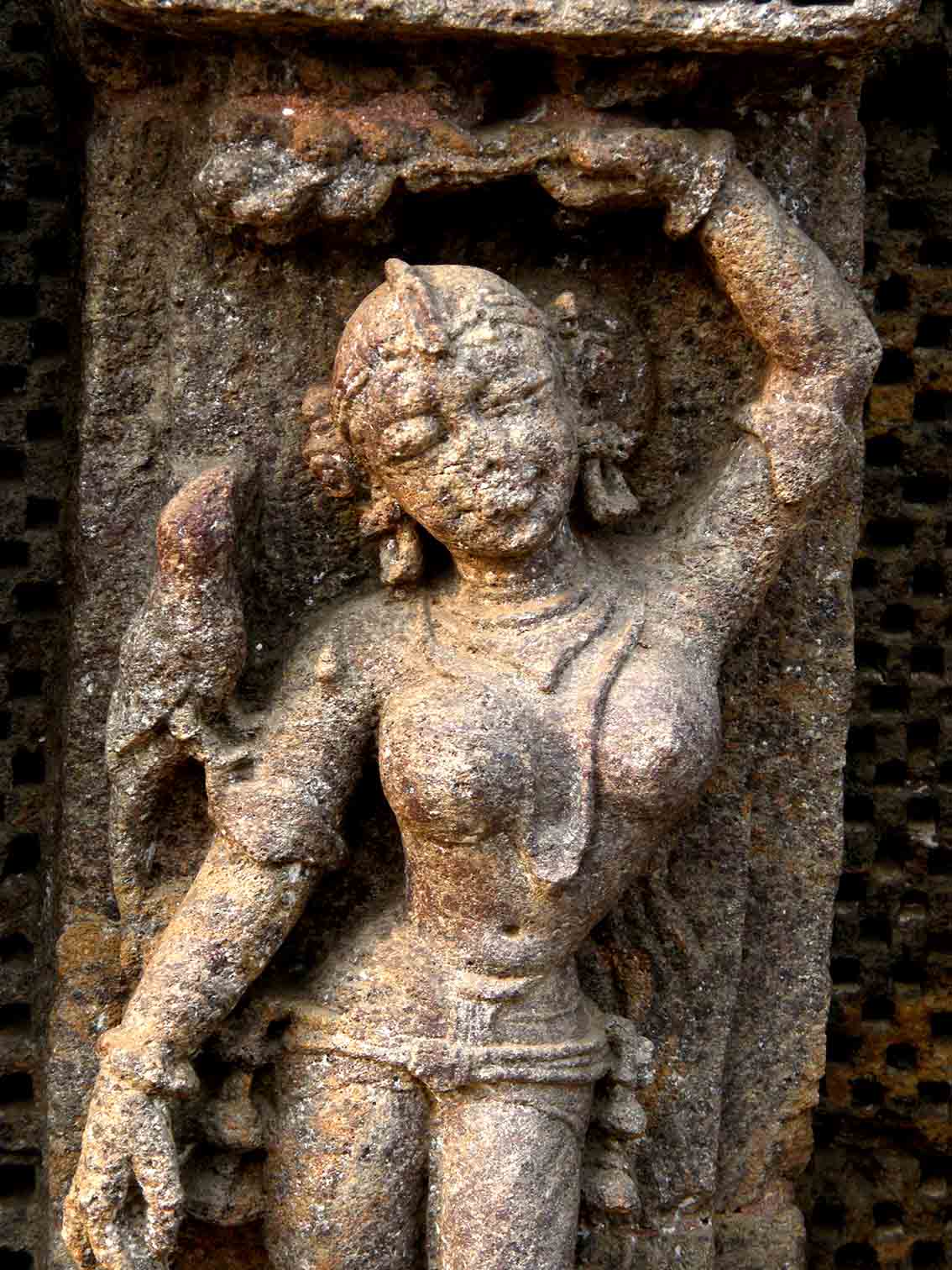 Dance in a ritualistic context is used in rights of passage, healing ceremonies, religious festivals in honour of a God or Goddess and in ushering in the change of season, in ceremonies relating to specific times of the year or month and so on. More can be learnt about this and its influence on belly dance costume in the page dedicated to dance in ritual.

In looking at dance in the context of social engagement, we could imagine people, in their everyday clothes, for example women of the Middle East wearing galabeya's, (long tunic like dresses), skirts, aprons, hip and head scarves, pantaloons and jewellery, worn as symbolic of tribe or status or just as adornment, breaking out into dance to accompany the work, or celebrate it's conclusion.

Belly dance costume was undoubtedly influenced by another example of social dancing which could be witnessed at social gatherings such as weddings or births which are themselves sacred occasions. For such occasions the costumes would reflect the occasion as a whole, at a wedding people would wear their finest clothes and jewellery, dancing would take place, existing as an aspect of the whole and not as it's focus.

So how did dance become a solo entertainment and hence what inspired the costumes and more particularly belly dance costume to accompany it?

Dance is an art form and beautiful to behold. I feel that regardless of it's context, dance is itself a sacred act and we can imagine people who recognised the skill of one dancer at a wedding for example, falling back to become observer rather than participator, admiring and enjoying the way in which their friend moves and expresses the music and joy of the occasion.

It may be possible to say this is how the dance as a solo art form evolved. In a ritual context, there may have been one main dancer, a woman holding the status worthy of dancing for the God or Goddess, trained in the art of channelling the deity energy.

Today, modern belly dance costume has been inspired by the clothing of ages past as well as the fashion of the day, which is decreed largely, if not wholly, by the western world.

Due to the large spectrum of styles that make up this dance form there are as many different costume styles such as...

...but most include these basic elements...

What about making your own? Here's what I advise... affordable belly dancing costumes.

If you are voluptuous and looking for plus size costumes you'll find some useful tips here.

Throughout history there has been a constant flux in the ruling powers for any one country.

The Middle East, when speaking of this dance as originating primarily from this region, has seen the Romans, Greeks, British, Mongols, Turks, Indians, Arabs, French, and the Russians, and with each change in, or subtle influence of, ruling power comes the cultural signatures of that power. Hence to discover the origin of any style, be it dance or costume, can be elusive.

We could say that clothing all begins with invention, inspired by the need for practical solution or through playful revelation. The latter being especially so in the case of belly dance costume. Clothing evolved according to the requirements of the people in their environment, or for particular occasions.

“Where human intelligence found similar requirements and the same climate, the same form of costume had to be evolved in spite of local modifications. (Max Tilke: Oriental Costumes their Designs and Colors)”

In a desert environment, long flowing loose skirts or galabeya's allow for the air to circulate and keep the body cool as well as protecting the body from the sun, wind and sand. Face and head veils are used for a similar function, to protect the eyes and nose from sand and wind and sun and for warmth during cold desert nights.

Costume or clothing has also been influenced by religious decree. For example in Islam, the loose full body covering galabeya or dress and head veil are worn by women to serve as a screen, a way of 'protecting' women from the eyes of the world, for them to appear conservative and pious.

So when we look at costume as a separate entity to clothing, or daily wear, we should take into account the function and context of the performance or entertainment. In this case we are discussing Middle Eastern dancewear, or belly dance costume.

If we are performing a historically correct reproduction of dance in the Middle East we must look to the examples of clothing left to us in tomb and temple paintings from the area in general, or the country in particular that we are wanting to portray. Any historical source that provides a representation of what was worn in history, before the dance became a performance art, must be researched and then a common ground created from which to build your belly dance costume.

If we are not performing in the context of historical re-enactment then we look to the style of dance we resonate with and research it's various interpretations and historical sources, however far removed.

Today Middle Eastern or belly dance costume is not generally historically correct but has evolved from the imaginations and fantasies of the mind and heart.

So with that lets look at the various styles of Middle Eastern dance that exist today and build a picture of the belly dance costume relating to each.