Welcome to the world of Egyptian music and Middle Eastern Rhythms.

I have described a few of the most commonly used rhythms in Egyptian music, played on the Arabic Tabla, also called 'darabouka' or 'doumbek', in their simplest forms. You will hear that musicians take the basic rhythms and add to them with extra 'TAK's', 'KA's' or 'SAK's”, depending on tempo or mood of the music. You can practice these rhythms by using different claps with your hands to create the different sounds and pitches.

To play a DOUM you strike the drumhead centrally with your four fingers held together, striking fast and lifting your hand quickly.

The TAK is a high-pitched 'metallic' sound, played with the tips of two fingers of your primary hand. Striking fast with your fingers where the drum rim and skin meet.

The KA is the same as the TAK, only played with your secondary hand.

The SAC is created by DOUM'ing the darabouka with your four fingers - but instead of lifting your hand immediately you keep it there a bit longer so that there is no reverberation, this creates a flat DOUM sound so typical of Egyptian music.

The rests between primary beats, be they DOUM's or TAK's, is the space in which musicians will play by adding extra TAK's, or KA's, or other accents such as the drum role. Another accent technique is to TAK the drumhead whilst cupping your secondary hand under it, creating a flat high pitched sound.

The Rhythms of Egyptian music

This is the most commonly heard family of rhythms in Middle Eastern or Egyptian music. It has been said, notably by Hossam Ramzy a famous Egyptian composer and musician, that the Maqsuum is the basis of all Egyptian music rhythms.

When the Maqsuum rhythm is played as a two beat rhythm, when it is fast and the rests filled in with extra accents, it is given the name 'Falaahi'.

This is the name of an area in Upper Egypt (in the south), where the men's stick dance, 'Tahtib', and the woman's cane dance, originate. This rhythm is also of the Maqsuum family of Egyptian music.

With a bridge (the bridge is used to seamlessly join each measure, or bar of beats):

This rhythm has the same core as the Maqsuum. It has three versions differentiated by the number of DOUM's in each.

This is similar to the small Masmuudy, only there is one less Tak on the end, and it is played as a 4/4 rhythm instead of an 8/4. The word Baladi means, 'my country', or 'my people'. This is a folky version of the Maqsuum.

This rhythm is used for trance dances, dancing ceremoniously with spiritual intent and for a healing. A name for one such trance dance of North Africa (Egypt and Morocco) is the 'Zarr'. When played for such a ceremony, the rhythm is slow, and may build up in tempo. This rhythm is also used for dancing outside of a trance dance ceremony, in 'belly dance' Egyptian music, and in such a case the tempo is faster. In this rhythm you can hear the gait of a camel.

How you interpret these rhythms, these series of DOUM's, TAK's and other accents, along with the melody of pipe or other instrument, is entirely up to your imagination, based on your dance movement vocabulary and feel for Egyptian music.

In keeping true to the Middle Eastern dance form, there is a body of movements and their executions that are necessary to keep to in order to call it 'Middle Eastern', 'Oriental' or 'Belly dance'. As long as you are displaying the movements truthfully, you can also feel free to add accents of your own making, to be free and creative with the dance in terms of what part of the body and its movement you could engage to interpret a DOUM, TAK, or other aspect of the Egyptian music.

As a common example, you might do a hip drop for a 'DOUM' and a hip lift for a 'TAK', so if you were dancing to a Baladi rhythm your movements would go as such:

And to a Saidi rhythm:

Or you could choose to do rib slides for the DOUM's and rib lifts for the TAK's, whilst your arms are doing 'snake' movements to the melody created by the Nai, or reed pipe there are endless combinations and variations.

If you'd like to go from learning about Egyptian music and rhythms to learning how to belly dance please click here. 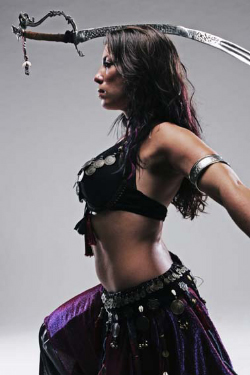